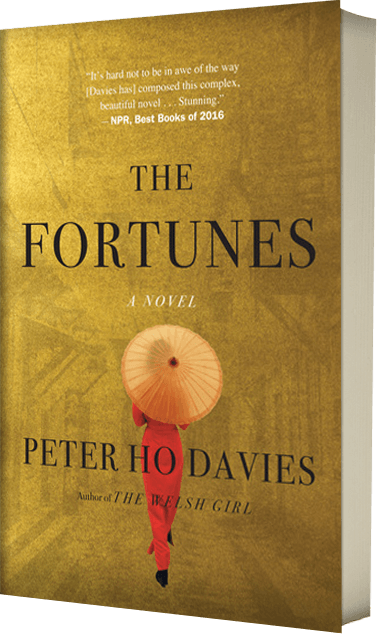 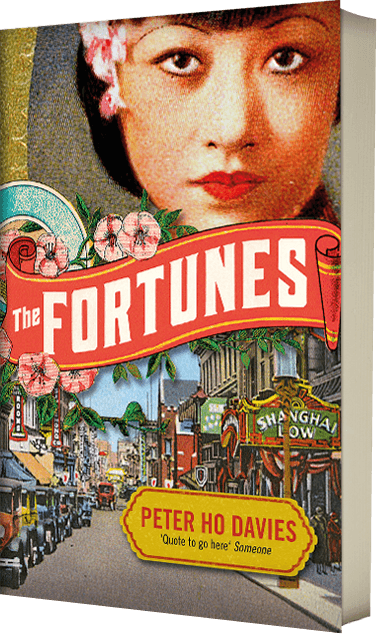 Sly, funny, intelligent, and artfully structured, The Fortunes recasts American history through the lives of Chinese Americans and reimagines the multigenerational novel through the fractures of immigrant family experience. Inhabiting four lives—a railroad baron’s valet who unwittingly ignites an explosion in Chinese labor, Hollywood’s first Chinese movie star, a hate-crime victim whose death mobilizes Asian Americans, and a biracial writer visiting China for an adoption—this novel captures and capsizes over a century of our history, showing that even as family bonds are denied and broken, a community can survive—as much through love as blood.Building fact into fiction, spinning fiction around fact, Davies uses each of these stories—three inspired by real historical characters—to examine the process of becoming not only Chinese American, but American.

“It’s unreasonable to expect one book to capture the breadth of a racialized experience…yet The Fortunes comes astonishingly close. It should take its place as a seminal, defining text on the Chinese-American experience,”
– Times Literary Supplement

“The American immigrant experience is rich fictional territory that has been mined by some fine writers (Chimamanda Ngozi Adichie, Jhumpa Lahiri, Julie Otsuka) and Davies is absolutely their equal. It is hard to imagine a novelist more alive to the layered ironies of national identity,”
—The Sunday Times

“A new contender for the Great Chinese-American Novel…Davies has gathered the threads of Chinese American identity and woven a brilliant, ambitious and indelible tale…”
—South China Morning Post

“[The Fortunes is] doing what a great novel should do: revealing what there is to care about and think about. Even better, it’s revealing those questions about a slice of history that America needs to be dealing with,”
—The Huffington Post

“Vividly detailed novellas whose rich language and engaging characters not only bring history alive but also address contemporary issues of race and belonging with heartache, fire and empathy…The Fortunes is an important novel that attempts to give voice to Chinese-American characters who have been silenced in the past,”
—Dallas Morning News

“Panoramic in scope yet intimate in detail, The Fortunes might be the most honest, unflinching, cathartically biting novel I’ve read about the Chinese American experience. It asks the big questions about identity and history that every American needs to ask in the 21st century.”
—Celeste Ng, author of Everything I Never Told You

“Only a writer as gifted as Peter Ho Davies could capture the full weight of a century’s history with such an extraordinary lightness of touch. In his deft hands the dust falls away from a collection of hoary images—the building of the transcontinental railroad, the steaming laundry in Chinatown, the Dragon Lady flickering onscreen—revealing Chinese-American lives and desires in all their freshness, intensity, contradictoriness, and depth. Buoyant yet profound, unsentimental yet affecting, and above all beautifully written, The Fortunes reimagines in thrilling ways what the multi-generational immigrant novel can be.”
—Sarah Shun-lien Bynum, author of Madeleine Is Sleeping and Ms. Hempel Chronicles

“The Fortunes is wonderfully lucid and sharply imagined. From the very first page, the people in this novel rise from history and we root for them, empathizing with them, as they make their way in the early American West and beyond. It was so easy to be lost in the story, to walk with them for a while, loving and longing and grieving with them. Readers will be richer for it.”
—Jesmyn Ward, author of Salvage the Bones, Men We Reaped, and Where the Line Bleeds

“TheFortunes is a genre bender, unique in conception and rich in resonance. It combines fiction with history and myth and depicts a different kind of America, one produced by the mingling of races and cultures. This book illuminates an obscure side of the immigrant experience.”
—Ha Jin, author of A Map of Betrayal, Waiting, and others

“A poignant, cascading four-part novel about being Asian and western, about immigrants and natives, about belonging in a country and one’s skin. It’s outstanding.”
—David Mitchell

“The book’s scope is impressive, but what’s even more staggering is the utter intimacy and honesty of each character’s introspection. More extraordinary still is the depth and the texture created by the juxtaposition of different eras, making for a story not just of any one person but of hundreds of years and tens of millions of people. Davies (The Welsh Girl) has created a brilliant, absorbing masterpiece. ”
—Publishers Weekly (starred review)

“Not to be missed…Using both real and fictional figures in Chinese American history, Ho Davies has created a masterful novel about what it is to feel like an outsider in the place you call home. It is also the story of America, told through the eyes of her immigrants.”
—The Bookseller (UK), Editor’s Choice